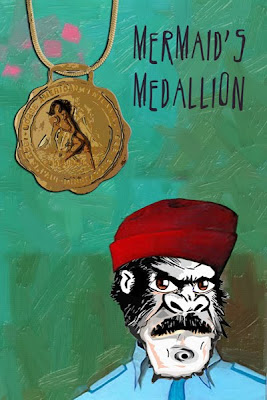 ACT 1:
S1: Quincy is on air, selling cocktail blenders (in the shape of Goomba) to the masses. Much to Stinkyfinger's annoyance - Goomba has struck a deal with Raspi Calaka to sell his image rights for the design of this new product. "The Goomblitzer" is an all-in-one appliance that is particularly adept at mixing and excreting super-strong cocktails in less than a minute. Quincy is hosting the show - knocking back the booze and getting wildly drunk. He's showing signs of fatigue. It is unclear how many splits of banana he has been served... The studio is full of attractive women, allowing Quincy to serve them drinks of their choosing. Drunken, and unable to keep up with the debauchery, the room starts spinning. Quincy blacks out.

S2: Quincy wakes up in MI6, greeted by a concerned Honey Quimly. She explains that he is living life too fast and that his liver is like a shriveled prune. He can't keep up with all the drinking and flirting anymore. Hawkins is there, very distressed at this news. Quincy goes through denial, then gives in and resigns himself to bed rest. Hawkins tries to comfort him, "It's not so bad being immobile." It doesn't help Quincy wants to be left alone. Hawkins, to himself resolves that he will find a way to rejuvenate Quincy.

S3: The new Stinky's Pinky is under construction. Stinkyfinger is upset that it isn't done yet, and he is yelling on the phone with his insurance agency. Apparently he has explosion insurance, but the insurance company are trying to count exploding stripper bots as an "act of God". "No, it was an act of that damned Quincy Bonobo." The agency argues that he has explosion insurance, but not robot insurance, which is what he would need to cover exploding robots. Construction will not be completed for a week, and Stinkyfinger needs a new attraction in order to make up for lost business and to pay reconstruction costs.

S4: Quincy is delirious in bed. No sex. No drinking. No smoking. All he has is the darkness of his hospital room and the blue glow of the television. Psychedelic imagery. Underwater concepts. the room filling with water. A mermaid Honey Quimly swimming in through the window. approaching him. Swiggidy enters to keep him company, holding a potted pot plant. "It's a pot plant. in a pot. it's so meta." Quincy snaps back to reality. The TV shows a mermaid. Quincy shouts "Devo that!" Swiggidy puts the pot that the plant is in upside-down on the television. "I mean Tivo that!". Hawkins enters, wondering what the commotion is all about. they rewind and pause at a frame of the mermaid. a landmark in the background reveals that she resides off the western coast of Schwarz Island. Quincy has the hots for her. He wants to find her. Hawkins rolls his eyes towards the mermaid's chest, says that that is an ancient medallion said to grant immortality to the wearer. "Yes, Hawkins, she has amazing young perky breasts. We established that a long time ago. Now lets go turn that mermaiden into a mermaid!" But Quimly will be upset. Hawkins helps distract her while Swiggidy and Quincy fetch the sub.

S5: Stinkyfinger is in his office. it is just a rough cube of 2x4s. you can see outdoors. His TV is still taped together, and he is watching the same show, paused on nearly the same frame. "Just what my club needs."

ACT 2
S1: Quincy, Swiggidy, and Hawkins in the sub. Short, snappy back-from-the-commercial scene. Looking for that mermaid. Wait, there is a boat out here. Up periscope. What is stinkyfinger doing here?

S2: Stinkyfinger on the high seas. He is terrified and unable to come out of the house-like area in the center of the steamboat. Flashback to him upon reentry with Quincy. the shuttle falls. falls. speed. acceleration. skin pulling back as beads of sweat trickle along its folds. The capsule hits the water and PLUNGES. deep. deeper. darkness. strange, horrifying sea creatures take notice. Quincy is oblivious. Stinkyfinger is horrified. As the capsule begins to head back to the surface a few large creatures start to follow. The capsule reaches the surface, humans are there to intercept. The hatch is opened and Stinkyfinger is cowering in a corner, shriveled up in a ball around the toilet, hand stuck. Back on deck in the present, Stinkyfinger rolls out onto the deck on a segway. Gorbachov can barely hold back laughter. Stinkyfinger explains that it makes him feel like he is on land. Goomba starts jumping up and down, pointing out the periscope. The sub is spotted. Stinkyfinger segways over, punches out the glass, and jams his pinky into the hole.

Truck down the length of periscope, following the gas to:

S3: Quincy's sub, right below. Swiggidy is already coughing. The sub is filling up with noxious gas. Alarms go off. struggle. desperation. They have to surface to open the hatch to get fresh air. It surfaces.

S4: Stinkyfinger and crew open the sub. only Hawkins wheelchair is there. Stinkyfinger orders Gorbachov and Goomba underwater. Gorbachov says that they aren't waterproof. Only Stinkyfinger can go. He stares at the water apprehensively from the safety of his segway.

S5: Underwater, out the bottom airlock, Quincy is scuba diving. Hawkins is strapped to Swiggidy's back. In the midst of escape, they notice something. A fin disappearing behind a rock. The mermaid. They find her. Quincy is enamored. he approaches her. Stylized romantic imagery. They are about to embrace, about to kiss when suddenly a whoosh is seen. Stinkyfinger flies by, riding his segway underwater, scooping up the mermaid in a net. With a diving knife, he cuts Hawkins free. Hawkins starts plummeting into the abyss. Quincy shouts to Swiggidy to save Hawkins, but he is too busy holding sea shells up to his nipples. Quincy looks up at the mermaid ascending, then at Hawkins descending. He considers, then dives. Similar imagery to Stinkyfinger's flashback. eventually, he catches up to Hawkins and they begin to resurface.

S6: On board the odiferous digit, Stinkyfinger puts the mermaid in a tank and takes notice of her pendant. he plucks it from her and puts it on because it is some totally sweet hipster bling. Gorbachov acknowledges that is the immortality medallion. "How sure are you, Gorbachov?" "I'm pretty sure." "Are you sure enough to kick me in the balls?" "Sir?" "I mean, if it does what you say it will, I won't feel a thing." "I don't know if I'm comfortable doing that." "HAHAHA! I am invincible!!!!!" The steamboat approaches Schwarz harbor.

S1: Our heroes are back in their sub, ready to give chase. They torpedo the steamboat, putting a large crack in the side. Throughout the scene the crack widens, the boat is about to split in two. They are able to board. The fighting begins. Quincy fights Stinkyfinger. Hawkins fights Gorbachov by ramming into him. Swiggidy chills with Goomba. "Look out, Quincy! He has the medallion!" "It seems to be the source of his inflated confidence." The two are evenly matched. Stinkyfinger knocks Quincy down. He is showing signs of wear and tear, like at the studio. As stinkyfinger strikes, Quincy kicks the medallion, breaking it. "Huh. Who would have thought that something that grants immortality would be so fragile."  The boat snaps in half. both ends stay afloat. Stinkyfinger and Co are on the engine side. Stinkyfinger holds his pinky under the steamwheel, accelerating their escape. He hits a button on a remote control, draining the water from the mermaid's tank. she is drowning on the deck of the ship. Hawking is out of his wheelchair from the fight, can't get up. He is about to fall off the edge of the ship. This time Swiggidy grabs Hawking while Quincy grabs the mermaid. Swiggidy hope into the sub with Hawkins. Quincy stands atop the sub, half submerged. holding the mermaid romantically in front of a sunset. Quincy, pondering her fin: "So, baby. how does this work?" She makes a funny face. An egg pops out. "UGHHHHH! Gross!" He drops her. He enters the sub, muttering about what a waste the whole thing was...

Posted by Quincy Bonobo - Gigolo Magnifico! at 9:30 AM