Episode Two Synopsis - One Swung Over The Cuckoo's Nest 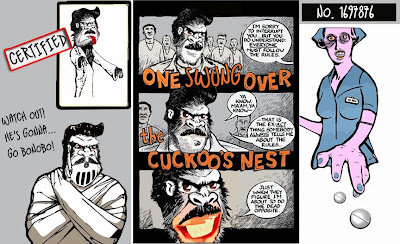 Live on air during his show on News Channel Sex, Quincy gets arrested.
Blojab Stinkyfinger has sued Quincy Bonobo and gotten an arbitration court to commit him to a mental institution for psychological analysis as punishment for blowing up The Stinky Pinky in Episode One.
Yizuka, the Schwarz Island police chief reluctantly and apologetically handcuffs Quincy and takes him to the mental institution.
When he gets there, he gets "clockwork oranged" by the robotic and emotionless Nurse Batshit.
The resulting brain scan officially diagnoses him as a sociopathic sexual deviant. Forced to wear an unbreakable pair of chastity pants in a padded cell, he manages to make one phone call to the outside world... he speaks to Honey Quimly at Mi6 and has to persuade her to break in to the asylum and rescue him.
This conversation sees Quincy have to swallow his pride and admit to Honey Quimly that he needs her. She uses this opportunity to have him promise that he will change his womanizing ways and try to become a better person. She also gets him to agree that Feminism is an actual movement of real and worthwhile women and definitely NOT just "a ridiculous and futile mission made up by angry dykes with hairy armpits that smell like two yeasty cats in a pissing contest"
During his stay in the asylum, he befriends all of the wackos and nutjobs and leads a rebellion against Nurse Batshit - just like Randal McMurphy.
Posted by Quincy Bonobo - Gigolo Magnifico! at 12:23 PM